Green 4 work with the Hollywood Bowl Group as they launch their new concept, Puttstars.

The Hollywood Bowl Group opened the first of their new Puttstars mini golf centres on Friday 6th March in Leeds, with a further two centres opening in Rochdale and York in the next couple of months.

"It’s been a hugely exciting journey for the whole Hollywood Bowl team. People have been putting balls through windmills for as long as they have been picking up bowling balls and throwing them at ten pins, and we thought there was an opportunity for us to put a more modern twist on what has been a fully enjoyed family pastime."
Stephen Burns, Chief Executive, Hollywood Bowl Group.

Having worked with the Hollywood Bowl Group for the last 10 years, Green 4 were asked to extend their booking engine software to support golf products and also to develop a new scoring application to replace the traditional pencil and paper approach used in golfing circles the world over. The scoring application designed and built by Green 4 would reside on a tablet device at each hole, and would record scores and convert them into points based on the number of shots, as well as having  “jokers” to play which would double up the points scored on the hole played.

The mutual benefit of this gamification approach is to enhance and add excitement to the game of mini golf, whilst at the same time providing Puttstars with personal details of everyone that plays a round. A fair trade which allows Puttstars to communicate personally with anyone who has previously played a game. 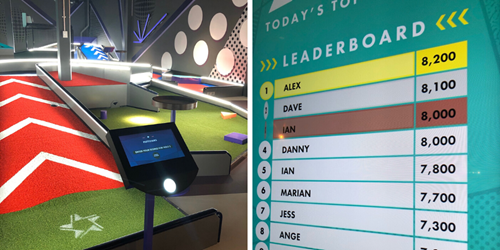 Hollywood Bowls previous CRM successes have been based on a very personal and targeted approach to encouraging repeat visits and increasing average spend per head through food and beverage offers. In order to achieve this, customer data is the critical ingredient. With the scoring innovation, guest data (rather than just the person making the booking) is added to the customer database.

The process to achieve this by launch day involved kick-off workshops and mapping out the requirements to deliver a solution, followed by a series of development sprints and regular development reviews, known as “Agile” framework, in order to ensure the progress was meeting expectations as well as budgeted expenditure.  All the developments and process testing were achieved in time for the successful opening of the first centre on 6th March.

“We have a strong relationship with Green 4 for our bowling reservation systems and we turned to them to provide a reservation system for our mini golf business – Puttstars. Green 4’s development methodologies and strong project management enabled both parties to have confidence in the final solutions and a successful first launch. More mini golf centres are planned and the solutions will be implemented in these new centres.”
Dave Wilson, IT Director, Hollywood Bowl Group

Please find below the presentation of the Reopening Protocols Webinar from Wednesday 13th May.